Ecus’s Ecology Team has worked with Sheffield City Council to help transform the Castlegate area of the city centre, by providing green spaces, and an array of plants, trees and grasses, in order to improve biodiversity.

The Grey to Green project is a £5.6m investment by the Sheffield City Region, the European Regional Development Fund, and Sheffield City Council, which has used innovative engineering and urban design to breathe new life into a once grey corner of Sheffield.  Roads have been pedestrianised, cycling infrastructure has been installed, green spaces have been introduced, art installations have cropped up, and seating areas have been developed.  The green areas and improved drainage system reconnect the city infrastructure to nearby waterways, ensuring that rainwater can be more easily absorbed and flow back into the rivers in a more natural and sustainable way. This helps to prevent urban flooding, which devastated parts of Sheffield back in 2007.

One of the most noticeable changes to Castlegate is how much greener it looks.  Our Ecology Team consulted with the council and advised on what type of plants, trees and grasses to plant.  They had to be drought–proof, so the council wouldn’t have to spend time, money and resources on watering them.  They also needed to be easily manageable – so they are the types of plants that can simply be cut back in the winter season and they will flourish from spring well into autumn.  Not only does the planting help to tackle air pollution, it reduces carbon emissions in the atmosphere and attracts wildlife to the city. Some of the art installations even double up as insect hotels and bird boxes, further increasing biodiversity, and attracting a range of insects and birds to areas that were previously busy roads. 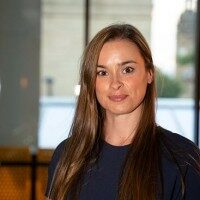 "As well as improving the economic performance of the Castlegate area of Sheffield city centre, Grey to Green has created a calm refuge in a busy urban environment and has transformed a previously tarmacked area into a green public space that encourages cycling and walking. It has been designed with climate change, wellbeing, biodiversity, and economic investment in mind. Ecus’s contribution to the biodiversity aspect has created an oasis of nature in the heart of Sheffield City Centre."