A day in my life as an ecologist

Our Graduate Ecologist, Abbie Jenkins BSc (Hons) MSc, blogs here about a typical day in the life of an ecologist, and why she loves her job! 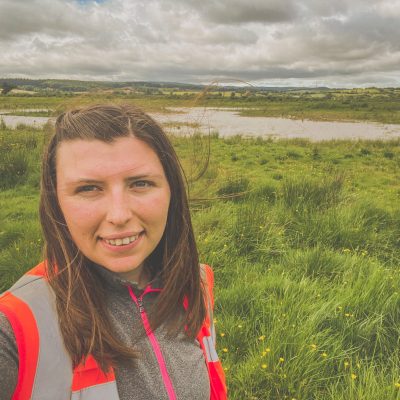 I love being an Ecologist because no day is the same. Projects can range from small scale buildings in local villages to more significant projects covering large stretches of railway lines. However, one aspect that stays the same is being out in nature no matter what the weather. If you love being surrounded by nature within the UK, then ecology is for you. There is never a dull moment as typical days include fighting your way through bramble, trampling through mud, and walking several miles down the railway track on ballast. However, it’s all part of the fun as an ecologist when you have wildlife encounters in some bizarre locations. It’s almost like they don’t follow the guidelines we humans have written for them!

The typical ecology season runs from March to September, with the busiest months being May, June, and July. During these times, every day brings a new site and new challenges.  Generally, most days begin with admin and answering emails from the day before. During COVID-19, this means either working from home, or for me, working in either the Cardiff or Bristol office. Different times of the year bring various surveys. From April to June, Great Crested Newt (GCN) surveys are carried out using bottle trapping, torching, egg case searching or eDNA surveys to determine the presence/absence of these species within ponds near to proposed work sites. May to September brings the bat season, which means mainly dawn and dusk bat surveys. These take a little bit of time to get used to but being able to witness foraging, commuting bats and beautiful sunrises and sunsets are all worth the early mornings and late evenings. Other surveys during the season include badger, dormice, bird, and phase 1 surveys.

During the 2021 ecology season, I have been working with dormouse licenced colleagues checking multiple dormouse tubes on long stretches of railway tracks, finding winter and summer hibernation nests, and sleeping hazel dormice in some bizarre locations! I have assisted on several crossing point surveys, transect surveys and dusk emergence/dawn re-entry bat surveys in several locations, finding a wide range of UK bat species and potential roosts. I have also monitored a closed-down badger sett under a license for proposed works nearby.

Winter months tend to be a bit quieter than the busy summer season. Still, surveys include site visits and assessments for preliminary ecological appraisals, building and tree assessments for bat roosting potential, badger surveys, otter surveys, Ecological Clerk of Works (ECoW), and writing reports for clients all need to be done. A lot of work in the winter months involves ECoW work advising construction projects and supervising proposed works. Some shifts involve no protected species found, while others involve a wide range of species. During a week on ECoW in 2021, I was lucky enough to find a grass snake, slow worm, GCN, shrew, bank vole and a rabbit.

After some surveys, I am soaked right through and shivering after a long day; the early mornings and late nights also require time to get used to. But it’s all worth it when the people you work with are great and make it all worthwhile. The endless wildlife encounters on most sites bring a smile to my face, and to have a career with constant opportunities to learn something new is great. Having the opportunity to work and be out in nature is something I love and can’t wait for next season!